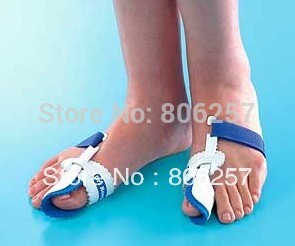 The term hallux valgus actually describes what happens to the big toe. Hallux is the medical term for big toe, and valgus is an anatomic term that means the deformity goes in a direction away from the midline of the body. So in hallux valgus the big toe begins to point towards the outside of the foot. As this condition worsens, other changes occur in the foot that increase the problem. One of those changes is that the bone just above the big toe, the first metatarsal, usually develops too much of an angle in the other direction. This condition is called metatarsus primus varus. Metatarsus primus means first metatarsal, and varus is the medical term that means the deformity goes in a direction towards the midline of the body. This creates a situation where the first metatarsal and the big toe now form an angle with the point sticking out at the inside edge of the ball of the foot. The bunion that develops is actually a response to the pressure from the shoe on the point of this angle. At first the bump is made up of irritated, swollen tissue that is constantly caught between the shoe and the bone beneath the skin. As time goes on, the constant pressure may cause the bone to thicken as well, creating an even larger lump to rub against the shoe.

Causes
A true bunion or hallux valgus results from a drifting inwards of the big toe metatarsal from its normal position closer to the second metatarsal. The bunion is the head of this first metatarsal which produces the prominence on the inner side of the now wider foot. Tendons run circumferentially around the metatarsal and toe. They both move and stabilise the toe under normal circumstances. In a bunion or hallux valgus, with the shift/displacement of the first metatarsal these tendons no longer lie in the correct axis and in fact act as a deforming force, contributing to the bunion condition.

Symptoms
The dominant symptom of a bunion is a big bulging bump on the inside of the base of the big toe. Other symptoms include swelling, soreness and redness around the big toe joint, a tough callus at the bottom of the big toe and persistent or intermittent pain.

Diagnosis
X-rays are the best way to determine the amount of deformity of the MTP joint. Blood work may be required to rule out other diseases that may be associated with bunions such as rheumatoid arthritis. Other tests such as bone scans or MRI's are not usually required.

Non Surgical Treatment
Treatment of hallux valgus nearly always starts with adapting shoe wear to fit the foot. In the early stages of hallux valgus, converting from a shoe with a pointed toe to a shoe with a wide forefoot (or toe box) may arrest the progression of the deformity. Since the pain that arises from the bunion is due to pressure from the shoe, treatment focuses on removing the pressure that the shoe exerts on the deformity. Wider shoes reduce the pressure on the bunion. Bunion pads may reduce pressure and rubbing from the shoe. There are also numerous devices, such as toe spacers, that attempt to splint the big toe and reverse the deforming forces.

Surgical Treatment
The operation involves removing the enlarged portion of bone. Ligaments and tendons that are too tight around the joint are released. The metatarsal bone in the big toe is then cut and shifted to a normal alignment that also makes the forefoot narrower. The cut bone is held in place with a screw or wire, which is not removed unless it causes problems. The loose, stretched out joint capsule is then tightened completing the soft tissue balance required for your deformity. Both feet can be operated on at the same time, but this does further limit mobility after surgery.

Prevention
The best way to reduce your chances of developing bunions is to wear shoes that fit properly. Shoes that are too tight or have high heels can force your toes together. Bunions are rare in populations that don?t wear shoes. Make sure your shoes are the correct size and that there's enough room to move your toes freely. It's best to avoid wearing shoes with high heels or pointed toes.

Foot Pain In Bones On Top Of Foot

Login to quote this blog

You cannot quote because this article is private.